Below are PDFs or links to all reading assigned for Fall 2016. Students at Purchase College have one additional “think-piece” article to read each week; these are optional (but recommended) for students at QCC. For Purchase students, they are models for your major writing assignment this semester (due December 1), and I hope that they will spark your intuition to see additional connections between the music we study in class, the additional knowledge you bring to our class, and the world around you.

The two excerpts from a textbook by Jeremy Yudkin will introduce you to two elements of music, melody and texture: Yudkin 18-21, Yudkin 29-30

Additional homework reminder for Class #2: email your WordPress user name to music.drjones@gmail.com so I know who you are on the blog!

The patronage system was the main economic force that drove music production in the Baroque and Classical periods (a time span that covers the 17th and 18th centuries). The readings this week continue both your introduction to listening for specific musical features and our journey through music history.

The excerpt from a textbook by Kristine Forney offers another explanation of melody (which you already encountered in last week’s reading from Yudkin) and also introduces you to a few more elements of music (rhythm, harmony, form, tempo, and dynamics): Forney 8-16, Forney 26-32

The remaining three excerpts this week describe the Baroque period, which lasted approximately from 1600 to 1750 (Forney 102-107), and introduce you to a leading composer of the subsequent Classical period, Joseph Haydn (Forney 162-165, Yudkin 126-129).

Reading for Class #4 (QCC 9/16, Purchase 9/22) — The Enlightenment, the Industrial Revolution, and the rise of the middle class

Musical elements. None of this material is new, but this week we’ll be listening in class intently for finer distinctions in terms of harmony, melody, texture, and rhythm in music of the Classical period. The excerpt from Forney explains the pitch system behind Western music (scales, which are used to create melodies and harmonies) and texture: Forney 17-25 The excerpt from Yudkin covers another musical element that we’ve already touched upon, rhythm: Yudkin 23-25

The excerpt from Titon is an overview of European society: Titon 210-215.

Required only for Purchase students: This week’s think-piece reading is a light, short 2016 article on the role of the arts in the Olympics in the first half of the 20th century by Katherine Brooks in the Huffington Post (available here).

Continuing with the elements of music, the Yudkin excerpt provides another look at harmony: Yudkin 26-29 The Forney excerpt describes the most common instruments and ensembles that are found in Western music: Forney 39-52. You can listen to examples of these instruments being played here: https://drjonesmusic.me/instruments/

This week, we’re turning to the Romantic period, which approximately coincides with the 19th century, and we’ll be looking even more closely at music with words, specifically the music of Austrian composer Franz Schubert, and thinking about the long-term influence or ramifications of the cultural currents we’re examining.

On the Romantic period and Franz Schubert: Yudkin 159-170

One last reading assignment this week is a fun one that illustrates the cultural climate in which German-speaking composers like Schubert lived: a fairy tale (“The Juniper Tree”) from the compilation published by the Brothers Grimm in 1812, read by children across German-speaking lands in the 19th century (available here. Alternate link here).

In class this week, we’ll be discussing what it’s like to attend a classical music concert: how to find concerts, what to expect, and the programs that you receive when you attend. The excerpt from Forney helps set this topic up: Forney 4-7

Class this week will begin with a short midterm exam, followed by a continuation of our study of the Romantic period.

The only reading this week is a quick piece of famous literature, Edgar Allan Poe’s short story “The Tell-Tale Heart” from 1843: Poe – The Tell-Tale Heart We’ll discuss the content and style of Poe’s story in class, listening for his influence on and similarity to European musicians.

Required only for Purchase students: Scott Timberg, “The Revenge of Monoculture: The Internet gave us more choices but the mainstream won anyway,” (2016) in Salon (available here).

An overview of French music, including the composers Claude Debussy and Maurice Ravel: Forney 276-281

An prominent aesthetic trend in the arts in France was Symbolism, whose central idea (and one that makes its way into Belle Époque French music) is an avoidance of saying things directly, only doing so through powerful symbols and sweeping the audience away with the sensory overload of appealing to multiple senses at once (hearing  and smell and sight, for example). To introduce you to this literary style, you’ll be reading a characteristic work by Symbolist poet Charles Baudelaire called “Correspondances” (1857). Baudelaire’s poem, in both French and English, is available here. As you read this work, try to come up with a list of ways that Baudelaire’s style is different from that of Poe (see “The Tell-Tale Heart” from last week), but also consider what indications you might find in their works that show that Baudelaire would be a fan of Poe’s work — this will be good preparation for the musical styles we’ll compare and contrast in class.

Marcel Proust, In Search of Lost Time (1909) was a game-changer in literature for its stream-of-consciousness style. In addition, it goes beyond the beautiful melancholy of Baudelaire’s work and into a kind of pessimism that characterizes much fin-de-siècle (end of the century or turn of the century) art, not only in France. Read as far as you like until you feel like you have a sense of Proust’s style (available here) Edit 10/25: available here

This week, we’re going to listen to music made by people who were not wholeheartedly accepted by the classical music world of the 19th century–women, ethnic minorities, and racial minorities–thinking about the effect of their marginalization on their careers, their musical output, and their geographical identities.

We’ll be listening to music by three pianist-composers: Frederic Chopin (Yudkin 175-177), Scott Joplin (Yudkin 261-264), and Clara Schumann (Yudkin 167, 177-178). Even in a fairly progressive textbook such as Yudkin’s Clara’s story is told entirely in the context of her identity as her husband’s wife; it is rare for a typical music appreciation textbook to devote significant space to female composers. There are many reasons for this, which Yudkin (p. 167) begins to explore and which we will discuss in class: lack of legitimacy for female professionals in all fields before the 19th century, lack of political power of women in their own lives (women were technically property of their husbands in US until the mid-19th century, for example), and lack of documentation of women’s lives.

We’ll also be discussing music of the Black experience in early 20th-century America: the blues (Titon 164-166, Titon 176-178). To flesh out this discussion, I’m also asking you to read a poem by Langston Hughes, “I, Too” from 1945 (available here) and an overview of music censorship in America (Yudkin 301).

Required only for Purchase students: This week’s think-piece reading is an essay from American writer Langston Hughes, “The Negro Artist and the Racial Mountain” from 1926 (available here).

A blog post from a living American composer, Jenn Jolley, who is grappling with what she should compose to properly reflect the world around her, called This Will Be Our Reply to Violence

An introduction to Postmodernism: Yudkin 245-253

Descriptions of how minimalist music made audiences and composers feel from composer Steve Reich and flutist Ransom Wilson: Weiss 492-495

John Cage’s “Lecture on Nothing” from 1959: Cage, J. – Lecture on Nothing This text may seem a bit strange at first, but allow yourself to keep reading, to keep questioning what you’re reading and how it’s presented on the page — use your discomfort to ask yourself why Cage might have made the choices he did and what they do to you as a reader (and your expectations about how reading should go!).

Merce Cunningham was a dancer and teacher in New York City. A list of rules for teachers and students, compiled by educator Sister Corita Kent in 1967-68 and partly inspired by John Cage, was posted at the door of Cunningham’s dance studio for years: 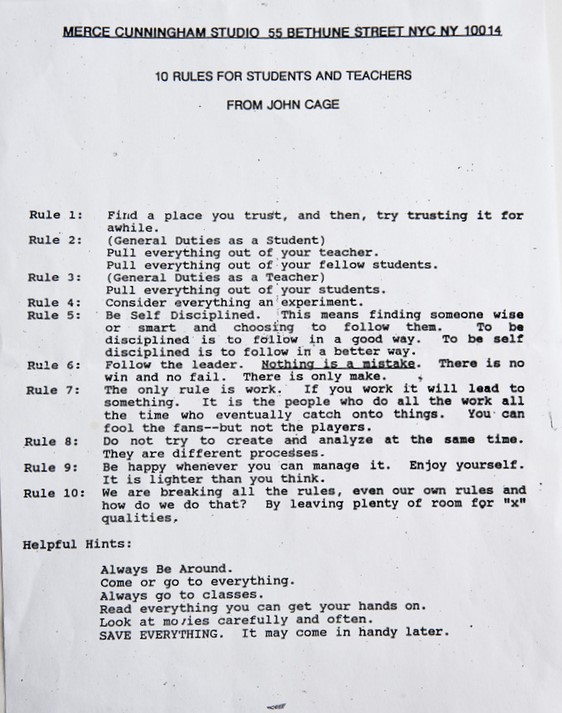 In class this week, we’ll be listening to music written by composers who are interested in blending musical ideas from different cultures to synthesize something new that is unbound by traditional limitations for how music can or cannot sound.

An excerpt from an interview with American composer Lou Harrison, in which he explains why he (and other 20th-century composers) feel so naturally drawn to the idea of combining musical cultures: Weiss 498-499

In class, we’ll return to the Harlem Renaissance with American composer William Grant Still (Cornelius 42-43, Forney 328-330) and see a similar blending of European classical traditions with another musical culture, in this case the music of Japan, with Tōru Takemitsu. Here is an essay from his book, Confronting Silence: Takemitsu – A Single Sound. We’ll also return to the music of John Cage, who in addition to being inspired by non-Western philosophy, also emulated some of the sounds of Indonesia in his music (Forney 368-375).