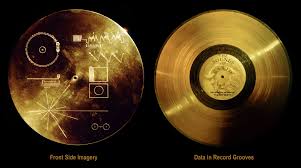 This week, let’s think about the role music plays in defining our lives, educating others about our lives, and acting as an ambassador before we even make contact with others.

The approximate reading time of this post is 1 minute, not counting any audio media.

The Voyager spacecrafts were launched in 1977 and have traveled beyond the edges of our solar system, carrying information about life on Earth. Both Voyager 1 and Voyager 2 contained a phonograph record of sounds and music selected by a committee chaired by Carl Sagan. The phonograph is nicknamed “The Golden Record.”

The recordings include the greetings in 55 languages; sounds of ocean surf, wind, thunder, footsteps, laughter, trains, and animal noises; and 90 minutes of music.

The plaque which is attached to the spacecraft includes a message from President Jimmy Carter:

This is a present from a small, distant world, a token of our sounds, our science, our images, our music, our thoughts and our feelings. We are attempting to survive our time so we may live into yours.

The entire list of music (27 recordings) included on the spacecraft is available here: http://voyager.jpl.nasa.gov/spacecraft/music.html What criteria do you think Sagan and his team used in 1977 to choose the recordings that represent humanity in space? How would those criteria be updated if a similar project were launched in 2019?

Igor Stravinsky, “Sacrificial Dance” from The Rite of Spring (1913)

Blind Willie Johnson, “Dark Was the Night, Cold Was the Ground” (1927)

Sample of images included on the spacecrafts

If we were to launch a similar spacecraft into space today to tell other beings in the universe what life on Earth is like, what would you suggest that we include? What aspects of life on Earth would need to be represented, and how could we do that? Explain why you think your chosen object, piece of music, or image needs to be on the spacecraft.